Castle Sisters #3 - The Invasion of the Imaginary Friends

New Castle Sisters book is now available!! I know, I know. 2 books in one month? I'm out of control. I'm telling 'ya, I've been on this productivity hot streak like you wouldn't believe. Or maybe you would, seeing as I put out two books this month.

Also, in celebration, I'm offering the first book, The Impossible Rescue, for free June 2nd - 3rd. If you haven't grabbed it yet, now's a great time to get it. Tell all of your friends to get it, too. They won't be disappointed. 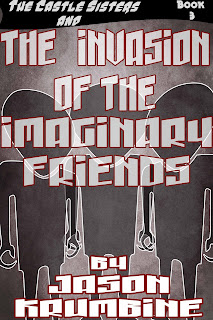 With Agent Dark and the Tancredi Group lying low, the Castle sisters are at a loss for clues to their nefarious plans and are facing an even greater threat: boredom.

Fortunately, Gianna Madsen has a problem that only the Castle sisters can solve: Her imaginary friend is trying to kill her! And, even worse, he might not be the only imaginary friend with sinister intentions.


It’s up to Faith and Summer to uncover the mystery and save the day before their world is invaded by people that are only supposed to exist in our imaginations!

And here's the info for the free book:

Faith and Summer Castle are the ultimate crime fighting duo.


And they're not even old enough to drive.
Faith has the super smarts and Summer brings the super brawn.

When their Uncle gets kidnapped by the evil Agent Dark the Castle Sisters find themselves facing their greatest challenge yet.

The forces of darkness are gathering and the battle between good and evil has reached a pivotal turning point. Agent Dark has stolen a secret formula that could give him the ultimate control. With the sisters' Uncle out of the way, no one stands between Agent Dark and the end of everything.

Not only does the fate of the world now hang in the balance, but the sisters must pull off what will almost certainly be an impossible rescue.