Here it is, the startling conclusion to Reapers in Heels Volume 2! 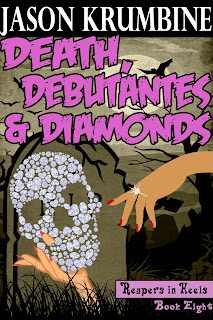 There are two sets of laws in this world: The Law of the Living and the Law of the Dead. And the Graves Sisters are getting caught between them both.

Avery’s love life will suffer as she cannot maintain the romance amongst the wickedness of death.

Brooke struggles with what she knows to be true and the pursuits of her heart.

There are dark days ahead for the Graves Sisters... 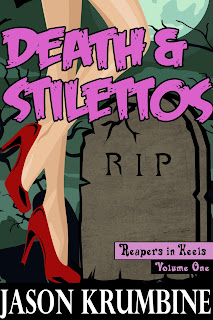 And, for this weekend only, Kindle users can pick up DEATH & STILETTOS for only $1.99. So, if you haven't yet, grab a copy, gift a couple to your friends, and get started on this sizzling series!


Remember, you don't actually need a Kindle anymore to download a Kindle book. Thanks to things like apps for your iPad or smartphone or even the Kindle cloud reader, you can download and read a Kindle book anywhere. All you really need is a Amazon account.
Posted by Jason Krumbine at 12:44 PM No comments:

Did you get a new Kindle? A new Nook? Perhaps a new iPad or Google tablet? Might I humbly recommend a few books for you to break it in with?

Death & Stilettos: The Complete Reapers in Heels Volume 1 is now available in one collected edition for Kindle and Nook readers.

Reapers in Heels in a urban fantasy romance series recommended for Mature Readers.

Grim Reapers are real. And they are bounty hunters of the dead.
They are governed by the Council of Reapers and are responsible for the capture and containment of dead souls that refuse to or cannot move on to the afterlife.
Avery and Brooke Graves are two such reapers in Century City.
For them, hunting down a renegade dead soul is easy. Hunting for a good man, however, is a whole 'nother challenge.
Sex, love and death. It's everything you could possibly want.
-------------------------------

This is the complete first volume of Reapers in Heels. It collects 3 previously published installments:

ONE STILETTO IN THE GRAVE

Jack and Cindy were a happily married couple. She was an elementary school teacher. He was an aspiring children's book author. They had the perfect life together, until the day they decided to kill themselves. Their souls never arrived in the afterlife and now it's up Avery and Brooke to find out where these deceased lovers have wandered off to.

A GRAVE FULL OF STILETTOS

Lori Standford's mother died six months ago, but she's too terrified to grieve properly. It seems Mommy Standford is back, haunting Lori out of her home. With nowhere else to go, Lori turns to the Graves sisters for help.

The Castle Sisters is an All-Ages Science Fiction Adventure series for the whole family. 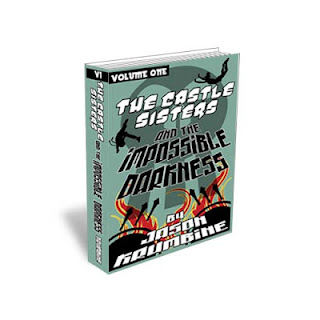 Faith and Summer Castle are the ultimate crime fighting duo.
And they're not even old enough to drive.
Faith has the super smarts and Summer brings the super brawn.

The forces of darkness are gathering and the battle between good and evil has reached a pivotal turning point.

When their Uncle gets kidnapped by the evil Agent Dark and the mysterious organization known only as the Tancredi Group, the Castle Sisters find themselves in the middle of that very battle.

It’s an adventure that will take the sisters from the concrete jungles of New York, to the frozen wastelands of the arctic, and to dimensions beyond our own.

The fate of the world may hang in the balance, but it’s just another day for the Castle Sisters.