Castle Sisters Book 2 - All Covered Up 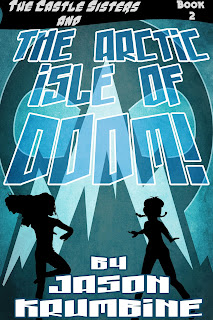 I don't know if I'm sold on the silhouettes, but otherwise it's pretty close to what I had in mind. Save the date, because we're looking at a mid-May release!!

Posted by Jason Krumbine at 6:27 PM No comments:

I just wrapped up the first draft of the second Castle Sisters book, THE ARCTIC ISLE OF DOOM! My first drafts are pretty close to my final drafts, so with the exception of some dialogue tweaking and editing its more or less done. This was originally going to be an April release, but now it's looking more like mid-May. But if it's done, why am I not releasing it until May? Because I'm starting work on the third Castle Sisters book right away, so editing and cover design for Book 2 is going to take a backseat for a week or so. Although, I plan on being stuck in an airplane at the beginning of May for a few hours, so I might get some of the heavy editing done then.

As soon as I nail down the cover for Book 2, I'll post it here.

In case you're wondering, I've outlined for 5 installments in what I'm considering Volume 1 of the Castle Sisters. So, fingers crossed that if everything goes according to plan, the next 4 books will roll out monthly, or twice monthly, starting May.

Here's a sneak peek at what's coming after The Castle Sisters V1 wraps:

-Reapers in Heels V2. This'll be another three books at least, maybe four. Haven't worked out all the details. I'm retiring the 'stiletto' title theme. I think each volume will have it's own little title theme, but I haven't decided what V2's will be.

-New Alex Cheradon books! Are you as excited as I am? Because I'm pretty excited! These will be written in my new, shorter style, where I plan out a volume of books, much like a season of a TV show(Like I'm doing with RiH and The Castle Sisters). So, basically, I'm getting to launch the Alex Cheradon TV show I've always wanted to do. Since the first three Alex books are standard full length novels, I'm not sure what the designation breakdown will be for the new installments. I'm toying with the idea of treating the first three books like TV movies, and then call these upcoming books Volume 1. I don't know how many installments you can expect from this new volume of Alex, but it'll probably somewhere between four and five. I can tell you that there will be a nice digital omnibus edition of Fruitbasket from Hell, A is for Amnesia, B is for Bullet and Little People, Big Crimes. It'll be price all nice and cheap so that'll be easy for new readers to jump onboard and get caught up. Alex has gotten lost in the shuffle a bit over the last year, but that's all about to change!

-Print!! I'm hoping to roll out print editions of RiH, Alex Cheradon, Outlawed Love and, of course, all of the Castle Sisters this year. It'll take a bit of time, but you'll finally be able to recommend my books to all of your friends who haven't got a Kindle or Nook yet.

In addition to all that, there's one or two mystery projects that my wife and I are still discussing. We're doing pro/con lists and waiting to see how quickly I turn a project around in this new style. But, the above RiH, Castle Sisters and Alex books are a lock. I'm committed to those series.

Posted by Jason Krumbine at 6:43 PM No comments:

So, my new all-ages book:

Is now available in a printed edition for $6.95 You can get it here.

It's also still available for $2.99 for your Kindle and Nook.

My nieces heartily recommend buying either edition. They desperately want to read the further adventures  of the Castle Sisters and want to be sure I don't have any excuses (For example: Nobody's buying them) for not writing them.