With Halloween right around the corner I thought I'd share this appropriately themed short story.

Brodrick kissed his wife lightly on the cheek. She looked lovingly into his eyes.

"Tonight," Precious said, her voice a throaty whisper, "Tonight is the night. All Hallow's Eve."

Brodrick's smile broke and a puzzled expression replaced it. "I thought it was Halloween?"

Precious' hand shot up the backside of Brodrick's head like a two-by-four. "All Hallow's Eve IS Halloween, you idiot!" she barked.

The oversized sleeves of Precious' pink clown outfit fell back as she spread her arms around the glowing Jack-O-Lantern. Yellow light pulsed out of the neatly carved face and cast shadows in the darkened kitchen. She grinned wickedly, "Within this Jack-O-Lantern lies power beyond our wildest dreams!" she paused for a moment and shot a sideways glance at her green-clad husband. Then she said dryly, "Or your's at least."
The cheapshot did not go unnoticed by Brodrick, who rolled his eyes and
said, "Oh my precious..." he faltered as he realized what he was going to say and
recovered with a weak smile, "...Precious-"
Precious cut him off, "Oh, shut up!"
The doorbell rang. Precious quickly grabbed a towel and threw it over the glowing pumpkin. She raced to the front of the house and opened door to find a devil-child, a pirate, and a four foot tall "Barrack Obama," standing on her front porch.
"Trick or Treat!" They shouted in unison as they lifted their bags expectantly.
Read more »
Posted by Jason Krumbine at 6:20 PM No comments:


So, until Halloween these two books are going to only be $0.99. They're great Halloween reads and the start of two excellent series. Grab a copy of each and tell all of your friends!

Grab Your Kindle Copy Now!
or if you're in the UK
You Can Get It Here 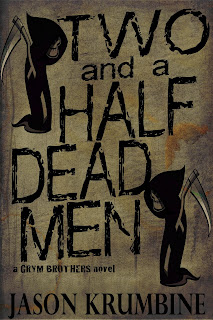 or if you're in the UK
You Can Get It Here

Posted by Jason Krumbine at 9:52 PM No comments:

Hey, it’s October, which means it’s a month-long build up to Halloween! Let’s get our spook on!

Okay, yeah, it might your work outfit. It’s kind of like a businessman dressing up as himself in a suit and tie, but, come on. A scraggly hooded robe and a scythe? That is an awesome costume. Plus, you can skip showering for the day and no one’s going to complain because you’re the Grim Reaper, you should smell like death warmed over.

Answer: Nothing. Witches? Nope. Gremlins. Not even close. The undead? Please. Vampires? I laugh at vampires.

You are Death. Boom. Nothing beats that. Not even dressing up as the Olsen Twins. Plus, if you want to be extra creepy, you can bring one of your dead souls with you when you hit up the party scene. It’ll be a scream.

No Need to Say Trick or Treat

Because, really, who’s going to make the Grim Reaper beg for their candy?

It’s the Only Time of Year You’re In Style

Sometimes it feels like death is never cool or it’s always coming at an inopportune time. But on Halloween? Everyone else is dressed to the nines at witches, goblins and zombies. Death can stroll down Main Ave and look positively normal.

Dude, you’re a Grim Reaper. When do you not feel like a celebrity?


But not all of the souls can or want to move onto the afterlife.

That’s where the brothers Thane and Mort Grym come in.

Thane and Mort are bounty hunters for dead souls. They inherited the job from their father and they’re two of the best in town.

But when there’s a double homicide at the Kirkland Motel the Grym brothers end up with more than they bargained for. In a world without vampires, zombies or the undead, one of their bounties might not be as dead as he’s supposed to be.


Get it at all these fine establishments:
Kindle US
Kindle UK
Nook
Smashwords
iBooks


Posted by Jason Krumbine at 7:31 AM No comments: