I have a new book out: In the twin cities of Clayton and Callahan, Alex Cheradon and Devon Christian are two somewhat famous-ish private investigators. They’ve saved the twin cities a couple of times, stopped a werewolf apocalypse or two and are the best of friends, despite that short period of time when Devon went crazy and tried to kill Alex. But it’s all water under the proverbial bridge now.

Times are tough and cheating spouses and missing kids don’t always pay the bills. Of course, thanks to a mysterious, mystical gem embedded in his chest, Devon can go weeks, sometimes even months without eating. Unfortunately for Alex, though, all he has is a sharp wit and an awesome collection of hilariously ironic T-Rex t-shirts, neither of which do much to satisfy the grumbling in his stomach.

Things start to look up, though, when the citizens of Clayton City end up getting harassed by the kind of monsters that nightmares are made of, that Stephen King’s best friends with and that American Horror Story features on a weekly basis. Monster hunting may not be Alex and Devon’s specialty, but at least it’ll put food on the table.

Fortunately for them, before they have a chance to trade in their PI licenses for battle axes, a new slightly less nightmare-inducing case walks right through their front door:

Ernest Leonard Milton died the night before. Cops say it looks like natural causes. Ernest Leonard Milton’s will says otherwise. From beyond the grave he’s demanding that Alex and Devon investigate his death. But what are they looking for? Nobody knows and all the evidence points to it being an open and shut case. That is, until the bodies start piling up.

Now in the course of investigating a simple dead body, Alex and Devon find themselves in the crosshairs of the twin cities most dastardly and deadly. Danger lurks around every corner, and creatures of the night under every rock. Perhaps they were too hasty with not purchasing those battle axes after all.

Available for Your Kindle Here

Email your receipt for Better Than Dead to onestrayword@jasonkrumbine.com and I will give you, for FREE, the complete Alex Cheradon V1: 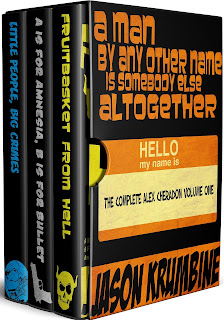 It contains the first three Alex Cheradon novels: Fruitbasket from Hell, A is for Amnesia, B is for Bullet and Little People, Big Crimes. That’s three full size novels for FREE. That’s a pretty sweet deal. Remember, all you have to do is purchase Better Than Dead for $0.99, email a copy of the receipt at onestrayword@jasonkrumbine.com and you get three novels for free.
Posted by Jason Krumbine at 8:20 PM