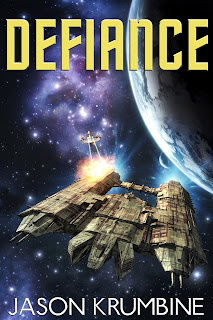 “What’s the damage, Mr. Warrick?” Mitchell asked, stepping around exposed conduits that were pumping out plumes of smoke.

There was a loud clanking sound followed by a stream of alien curses and then a short, stocky figure stepped out from behind open panels at the far end of the room.

Jaxson Warrick was a short, flat faced man with a shiny bald head and an impressively thick, bushy beard. He walked with an almost imperceptible limp and made up for his lack of height with a wide barrel chest and arms so thick they threatened to burst free of his uniforms at any given moment. He had wide feet and a nose that had been broken so many times he couldn’t remember what it used to look like.

“Cap’n,” he greeted Mitchell, wiping the grease from his meaty paws. In person his voice was even raspier than over the comm. There was something in the ship’s computer that automatically smoothed out the rougher patches of Warrick’s voice. It was a thick, heavy rasp that made every word out of his mouth sound like it was being weighed down by a ton of bricks. It gave the impression that speaking was a chore for him and people meeting him for the first time always expected him to speak slowly. But instead, Jaxson Warrick was one of the fastest, and most colorful, speakers on the Defiance.

His collar was unzipped halfway down his chest, exposing a dark green shirt that matched the dull green Fleet badge on his chest. The sleeves were rolled up and, remarkably, were the only parts of him that weren’t filthy. He wiped the rag across his forehead at the gathering sweat and, not the first time, he wished that he had been blessed with a physiology that kept him from sweating. “Well, I’ve got good news and I’ve got bad news.” He tossed the rag into the open toolkit and put his hands on his hips. “Which one do you want first?”

“Let’s go with the good news.” Mitchell followed him out of the room into main engineering.

The ion engine pulsed a light blue in the center of engineering. Two twin cylinders, twice the width of Warrick himself, stretched out the from the ground level up to the top decks of engineering. There was a low, throttling hum from the engines that every new crewman described as a flat, uneven squeal that often gave them the sensation of being mildly seasick. However, after about a month, it would fade into the background of everyday life in engineering. When the drive was active and they were really pushing it, various crewmen had reported getting a weird achy feeling in their teeth whenever they stood too close to the engines. For Warrick, though, he didn’t even notice that. The ion drive and all its quirks and personality had faded into the background of his life. The only time he became aware of it was when it wasn’t there anymore and then, almost always, he found himself missing that achy feeling in the back of his teeth. It made for a disappointing shore leave.

The two men ducked under the catwalk, avoiding a shower of sparks from the plasma welder above them.

“Well, that walking carrot did a hell of a job keeping most of the fire off our cargo bays,” Warrick shouted to be heard over the loud repairs.

“So the supplies?” Mitchell said.

“Not so much as a scratch.” Warrick glanced back over his shoulder. “Well, that’s not entirely true. Some idiot ensign forgot to strap a couple of cargo crates down, so they went flying while Kin spun us around like he was having a damn seizure. Nothing broke, though. The Carlock Colony should be plenty happy.”

“Any more good news?” He followed Warrick up a narrow staircase to the second level of engineering.

“Well, again, thanks to the Ruvatorian pinball of a nightmare Nax calls his ‘piloting,’ he also kept most of the damage off our hull,” Warrick said. “And what damage we did sustain is pretty evenly distributed.” He held up his hand and spread out his fingers. “Think of it like a couple of dozen paper cuts spread out over your hand.”

“That would still be pretty painful.”

“Well, yeah, but you could still use your hand,” Warrick said. “Unlike, say, if that paper had just chopped off a couple of your favorite fingers.” He folded down his middle finger. “Lose a finger and suddenly your hand is a lot harder to use. So, she’s hurting.” He patted the bulkhead affectionately. “But she’s still chugging along like an ancient purebred Taule champ that refuses to get put out to pasture. That ugly orange bastard saved us hours in repairs.”

“You know,” Mitchell said. “If you keep this up, people are going to think the two of you don’t actually get along.”

“Yeah, well, before you get ready to hand him a medal, you should know all his fancy flying blew out the gluon resistance compressors. So if you’re wondering why your food has a funky metal aftertaste to it for the next week, you can thank him,” Warrick said, crossing the catwalk to a small workstation off to the side. “Also, I don’t know if you’ve noticed, but thanks to one of those fancy spin dives of his, the gravity plating is out of alignment. Feel a little heavier?”

Mitchell took a deep breath and exhaled, glancing back over his shoulder at the narrow staircase they had climbed. “Now that you mention it, I am feeling a little winded from those stairs.”
“Yeah, until I can spare somebody to fix it, everybody’s gonna be feeling about two or three pounds heavier.”

Mitchell looked down at his stomach. “Okay, sure. I’ll go with that. So far your bad news isn’t that bad.”

Warrick tapped the screen on the workstation and a detailed blueprint popped up. “That’s not the bad news. Let’s call that the inconvenient news.” He pointed at the specs on the screen. “This is the bad news.”

Mitchell leaned forward for a better look. He recognized it as the specs for the fusion cannons and the main deflectors. “What’s wrong?”

“So, remember how I told you two weeks ago that we needed to overhaul the whole neutron circuit system?”

“Well, instead of telling me to patch it together on the fly, you should have given me the two weeks I asked for to do it right,” Warrick said.

“You know, Jaxson, there’s a way to say ‘I told you so’ that doesn’t border on insubordination.”

“Well,” Mitchell shrugged, “at least that’s what I’ve been told. I haven’t figured out myself yet.” He nodded at the screen. “What happened?”

“So the science department is still going over all the data they picked up on our trip through that wormhole. Well, I can save everybody a lot of a time and just tell you that it’s worse than Gaiyama herpes.” He adjusted the screen and digital copy of the wormhole appeared. Tiny lightning bolt shaped icons extended from the walls of the wormhole. “Care to gander a guess as to what these are?”

“Computer’s recording them as power surges. But those numbers can’t be right. That’s three times the output of the ion drive.” He pointed with his thumb over his shoulder at the twin cylinders.

Warrick nodded. “I don’t know what you want to call them. I’m sure Hawkins or somebody will come up with something fancy. Nax kept it tight on our way through, but we still skimmed over two of these little suckers.” He tapped the lightning bolt shaped icons. “When that happened, not only did they blow out the main deflectors, but since I diverted power from the fusion cannons to the deflectors, the higgs energizers got overloaded in the process of holding everything together and now they’re shot. Basically, until we get back to the Atlantic the fusions cannons are essentially Vulderran hood ornaments and the front of the ship is more exposed than a Sweezakaal stripper.”

“Holding up fine,” Warrick said. “We’re not going to get anything more than maybe fifty-five percent out of them, but at least you don’t have to worry about our ass just hanging out in the open. Now, of course, our forward deflectors are a whole ‘nother matter. Navigational deflectors are still fine. But anything bigger than some space rocks and we’re going to be retrofitting the front of the ship with some new viewports.”

“They’re all good. But if we get into a firefight where we have to actually fire back?” Warrick made a sour face. “Let’s just say you don’t want to ask what state our targeting systems are in right now because that’s just going to make you cry.”

“How long is it going to take?”

“For what? Our asses to get handed to us?” Warrick shrugged. “Nax’s a hell of a pilot, but a couple good shots at our hull without our deflectors and we’re toast. Maybe we’d last five minutes? Hell, I’ll give the orange bastard a little more credit and say he’ll hold everything together for ten. Past that? We’re space garbage.”

Get It On Amazon
Posted by Jason Krumbine at 4:47 PM