So here's the deal. I'm rebooting the Grym Brothers. 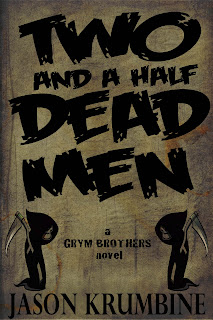 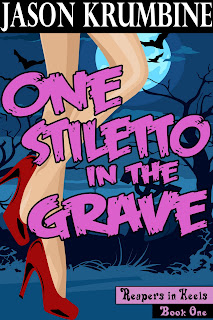 I know this might seem a little crazy, but bear with me for a moment.

During one of our walks my wife and I were discussing the Grym brothers and future books in the series when I suddenly had a revelation:

The Grym brothers should have been the Grym sisters.

When we originally came up with the idea of these grim reaping brothers, the plan was to create a more mainstream series that would appeal to an audience beyond that of the Alex Cheradon books, but still allow me to indulge in my favorite parts of writing. It never occurred to me that the mainstream reading audience was female and that the brothers have been sisters.

I don't normally write lead female characters. I tend to write what I know and, this may come as a shock to some of you, I'm not a woman. So my leads tended to be men. With the exception of OUTLAWED LOVE which had US Marshal Kate Sharpe carrying the book on her shapely shoulders.

As a side note, OUTLAWED LOVE is currently rocking a 4 out of 5 star rating on Apple iBooks with over 143 ratings, and that's just in the US.

So, apparently I have a better handle on female characters than I thought.

Anyway, back to the Grym brothers.

During the course of our 30 minute walk my wife and I explored the repercussions of a gender switch. Mort's philandering and (according to some reviewers) misogynistic behaviors, suddenly became a bizarre take on female empowerment. The concept of two brothers talking about their relationships felt slightly awkward and metro, but as females, it takes on a Sex in the City-type quality. Side characters such as Alan Gold and Stanley Morris took on whole new and, frankly, more interesting interpretations.

By the end of the walk we had decided to pull the trigger. TWO AND A HALF DEAD MEN would become ONE STILETTO IN THE GRAVE. Thane would become Avery. Mort transformed into Brooke. I changed their last name to Graves and series name to Reapers in Heels.

ONE STILETTO IN THE GRAVE is not just a rehash of TWO AND A HALF DEAD MEN. I've added new material, I've deleted old material. Some stuff might seem familiar at first, but later will take on a whole new meaning.

Even the Grym brothers themselves aren't really gone.

The book is a little longer, with more of an emphasis being placed on Avery's and Brooke's love lives. It's a little steamier in some places (Well, 'little' is probably underselling it.). The ending's even been changed.

The over-arcing plot has been changed dramatically and toned down even more so. There's still some serialization in the series. I fancy each book similar to an episode of a TV show, building to a season finale, but that doesn't mean that each book won't be able to stand on it's own.

So, that's the big news. As of December 2nd, I'll be pulling the Grym Brothers books from distribution. This shouldn't delete them from your e-reading devices. If it does, send me an email at onestrayword@gmail.com and I'll correct that for you. The Grym Brothers series may resurface later on in another format perhaps.

I think you're going to like the Graves sisters. I've grown quite fond of them in short time they've been around and I think you will, too.

Kindle US
Kindle UK
Nook
Smashwords
Posted by Jason Krumbine at 11:39 AM