Ripped From the Panels 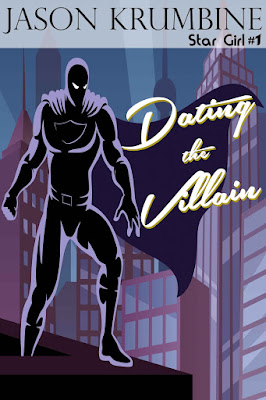 Adopted at age 4, Rose Gardens doesn’t know much about her life before her parents brought her to America. She has vague memories of her time in the small orphanage in the Hunan Province of China. But none of these memories offer any explanation as to how she can fly and bend steel pipes with her bare hands.

Naturally, that didn’t stop Rose from becoming a superhero.

Life is as close to perfect as Rose could imagine. She has the greatest parents, the perfect boyfriend, and her career as Star Girl has been fairly impressive.

With true love in her grasp, marriage may even be on the horizon for Rose and her boyfriend. But when a new villain tears into Century City, Rose finds her heart unexpectedly torn between the good man she knows she loves and the bad boy she finds herself irresistibly attracted to.

Star Girl was born out of two things: one of those high concept ideas that my wife and I occasionally stumble across during our evening walks (what if a superhero and supervillain were dating each other in their civilian identities and didn’t know it?) and my love of superheroes.

I love comic books. I started reading comics when I was about 13 years old with a DC Comics crossover event called Zero Hour. Sam’s Club had this bundle discount of the entire crossover and I devoured it over the weekend. I had no idea what was going on: Why did Superman have long hair? Wait, did Lois know that Clark was Superman? Who was Green Lantern? Was the Flash already dead? I just discovered him! It didn’t matter, I was hooked regardless.

My mom wasn’t thrilled with my interest of comic books and she did her best to stop it before it got too bad. Quick backstory: I was homeschooled all the way through high school. My parents were, obviously, extremely hands-on with my education. Homeschooling is a lifestyle that’s always kind of outside the box. Our school years would be often be constructed as unit studies, focusing on one general topic (for example, Ancient Egypt) and then funneling the essentials through that lens: English, math, history, science would all have connections to the topic of Ancient Egypt. Naturally, I hated it. I was thirteen years old. There wasn’t anything about school that I liked. This probably isn’t that much of a surprise to any of you.

So, my mother had this brilliant idea of using comic books as general topic for one year, hoping that she could burn it out of my system if I could end up associating comic books with schoolwork. To be fair, it wasn’t a bad idea. However, it was a horriblefailure. Digging into history and the behind-the-scenes workings of comic books only strengthened my passion and interest in them and I’ve been hooked ever since.

I grew up reading Green Lantern, the Flash and Superman. They were and still are my favorite superheroes. I cannot express to you the levels of excitement I felt when I heard they were going to make a new Flash TV show two years ago or the sadness I felt when DC Comics decided they were going to break up Clark Kent and Lois Lane’s marriage back in 2011.

Comic books have strongly influenced my sense of storytelling. With Star Girl I wanted to capture that same feeling I got when I read that DC Comics crossover. I wanted to thrust readers into a fully realized world of superheroes. And beyond the soap opera, YA romance, that's what Star Girl is really about. It's about superheroes and twisting those conventions and expectations on their side. I don't want to deconstruct superheroes, I want to share with you guys the same exhilaration and excitement I felt when I cracked open those first few issues of DC Comics.
Posted by Jason Krumbine at 10:10 AM